The leading and trusted non-invasive prenatal screening test for Down's syndrome and other serious genetic conditions.

Speak with EHA Clinics today to discuss having the IONA® test

The IONA® test is a non-invasive prenatal test for pregnant women which estimates the risk of a fetus having Down’s syndrome (T21), Edwards' syndrome (T18) and Patau’s Syndrome (T13).
The IONA® test is an advanced screening test carried out on a small blood sample taken from the mother’s arm with no risk of miscarriage. Fetal sex determination is available optionally in regions where fetal sex determination is permitted. Please ask your healthcare professional for further information.

The IONA® test, like all other non-invasive prenatal tests (NIPT), is a screening test and high-risk results should be discussed with your healthcare provider.

A non-invasive prenatal test (NIPT) is an advanced screening test using DNA in the mother's blood to estimate the risk of a fetus having Down’s syndrome, Edwards' syndrome and Patau’s syndrome.
There are many different NIPTs on the market, but the majority will screen for these three syndromes.
Edwards’ and Patau’s syndrome are much rarer than Down’s syndrome but are very serious and many affected babies die before or soon after birth. Trisomies occur when three, instead of the usual two, copies of a chromosome are present.

Traditional screening offered during the first trimester of pregnancy is currently called the Combined Test. This is an ultrasound scan to measure the nuchal translucency (NT), combined with a blood test. This is less accurate than NIPT, detecting about 85% of babies with Down’s syndrome.

The IONA® test has a higher detection rate than the Combined Test. The IONA® test is also better able to exclude false positives. This is when the test reports the baby is at a high risk of having Down’s syndrome but is actually unaffected.
The IONA® test is much better at ensuring the babies identified are truly high risk. This allows the doctor to only refer the mother for an invasive test when it is highly likely that the baby is affected by a trisomy. This means fewer pregnant women will undergo unnecessary invasive follow-up procedure such as amniocentesis or CVS which can be stressful, painful and may carry a small risk of miscarriage.

How does it work? 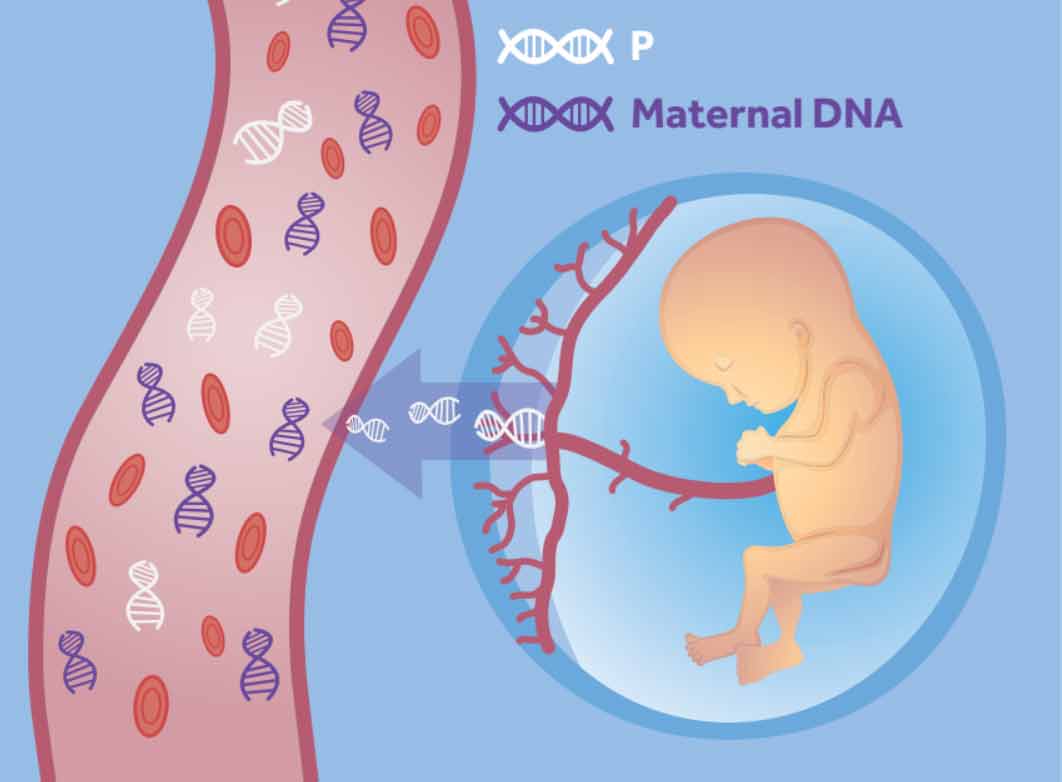 From 10 weeks gestation a small blood sample is taken from the mother’s arm and sent for analysis with the IONA® test.

The IONA® Software for analysis calculates the relative amount of chromosomes 21, 18 and 13 to produce a risk score to predict the presence of a trisomy. This figure is then combined with the prior risk (by default this is the mother’s age but the result of the First Trimester Combined Test (FTCT) can be used instead) to calculate the probability of the fetus being affected.

Who can have the IONA® test?

Unsuitable if the mother

What are the results?

IONA® test results are reported as:

The results of your IONA® test should be discussed in detail with your healthcare professional.

The IONA® test offers optional testing to determine the baby’s sex. A “sex determination failure” result may be reported if there is insufficient data to support the sex determination analysis. A failed result does not reflect on the quality of any other result generated by the IONA® test.

Please note that the sex determining technique is not a screening test for rare sex chromosome conditions and is not currently available for multiple births except for identical (monochorionic) twin pregnancies. We therefore recommend that fetal sex determination is confirmed by ultrasound.

How accurate is the IONA® test for Down’s syndrome?

The Detection Rate (sensitivity) of IONA® for Down’s syndrome is 99.99%, which means that nearly every case of Down’s syndrome will be detected with very few false negative results (affected pregnancies falsely screened as low risk).

False Positive Rate (FPR) is the proportion of pregnancies that do not have the syndrome but have screened as high risk. A false positive result means that although NIPT indicates a high risk of trisomy 21, the fetus does not have this condition.

How accurate is the IONA® test?

The IONA® test has an overall accuracy of 99.8% and a less than 0.5% failure rate for Down’s syndrome, Edwards’ syndrome and Patau’s syndrome.

What is the false positive rate?

Less than 1% of pregnant women may receive a high risk result from the IONA® test and then go onto to have a follow-up invasive test which confirms that the fetus is not affected with trisomy 21, 18 or 13.

How is the sample taken?

A simple blood sample is taken from your arm by a healthcare professional after you have been pregnant for at least 10 weeks.

What is the current method of screening?

Currently most healthcare systems offer pregnant women the combined test which includes a fetal ultrasound and blood test performed at about 11-13 weeks into the pregnancy.

The ultrasound looks at multiple aspects of the developing fetus, but particularly at the skin fold at the top of the spine where it meets the skull, this is called the Nuchal Translucency (NT). The blood test measures the levels of two hormones: hCG and PAPP-A. The current combined test has a ~85% detection rate and ~5% false positive rate.

Is the IONA® test replacing the 11-13 week dating scan?

No, it is recommended that you still have this dating scan at 11-13 weeks to assess the baby's growth and development. The IONA® test or any other non-invasive prenatal DNA screening test will not replace this dating ultrasound.

It is not 100% conclusive due to naturally occurring biological instances where the fetal DNA differs from the placental DNA. The IONA® test is a screening test.

How long will it take to get the results?

Once the sample is received at the laboratory it can take between 8-10 working days to perform the test. The data from the laboratory test is entered into the IONA® analysis software and an easy to interpret result report is generated and given to your healthcare professional such as a consultant or midwife. This report will then be discussed with you by your healthcare professional.

What are my options if I have a high-risk result for a trisomy?

Can I have the IONA® test if I have twins?

Can I have the IONA® test if I have had a blood transfusion?

The accuracy of the IONA® test may be affected if the mother has undergone a non-leucocyte depleted blood transfusion in the last 12 months. Suitability for the IONA® test should be discussed with your healthcare professional.

For more information please do not hesitate to contact any of our customer representative.